The Charlotte Geeks Book Club meets on the second Tuesday of each month from 7-8  pm at Park Road Books in the Park Rd shopping center.  Our illustrious leader and supreme book-chooser, Nathan, alternates the book choices between the fantasy and sci-fi genres.  We have a friendly discussion of the novel’s plot points, characters, and themes (that sometimes stays on topic), and then head next door for drinks, dinner and further discourse at Sir Edmond Halley’s.  I recommend ordering the buffalo chicken fingers for some crispy, spicy perfection. 🙂

A suspenseful post-apocalyptic story, Wool is actually a collection of five short stories or novellas that were self-published on Amazon and then collected into an omnibus for print.

Set in a future Earth that has been turned toxic by some unnamed cause, humanity exists in a giant underground silo that is hundreds of stories deep.  Each person is assigned a designated job and section of the silo where they both live and work with little movement and limited communication between the levels.  The biggest taboo, to which the penalty is death, is to want to go outside. 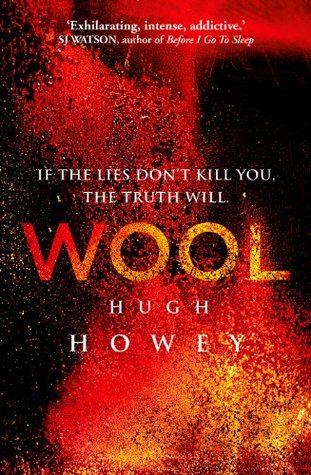 My husband was super excited about this month’s pick because he has been a huge fan of the author’s work for awhile.  He already had the collection of shorts on his kindle, as well as the second and third installments of the series: Shift and Dust.

I also thoroughly enjoyed this story.  The plot is absorbing and fast-paced with many likable characters, even the ones that were a bit one-dimensional.  Howey did an excellent job of creating a vivid world that sucks you in and makes you want to learn more.  The build-up to the climax was super stressful, and there were a few bits that I was literally racing through because of the intensity of the scene.

Book club was a much smaller crowd this month, likely due to it being election day, but because there were so few people, the conversation was much more intimate.  We didn’t get off track quite as often, and the discussion was engrossing and educational .  It was super cool to hear the insight that a few members of the group supplied.  The conversations can get quite in-depth when we have biologists and mechanical engineers discussing the finer points of the science. 🙂

In case all this praise for the story hasn’t convinced you to pick it up yet, here is a super cheesy German book trailer I found on Youtube.  If it doesn’t win you over then there is no hope for you 😀

Would you like to join us next month? You can RSVP here on the Meetup site.  The December book is Alif the Unseen, a fantasy novel by G Willow Wilson.

Don’t forget to grab your copy of December’s selection from Park Road Books for a 20% discount!

Coming to a theater near you: May 11th. Special Edition!

The Thorn and the Blossom by Theodora Goss

This site uses Akismet to reduce spam. Learn how your comment data is processed.